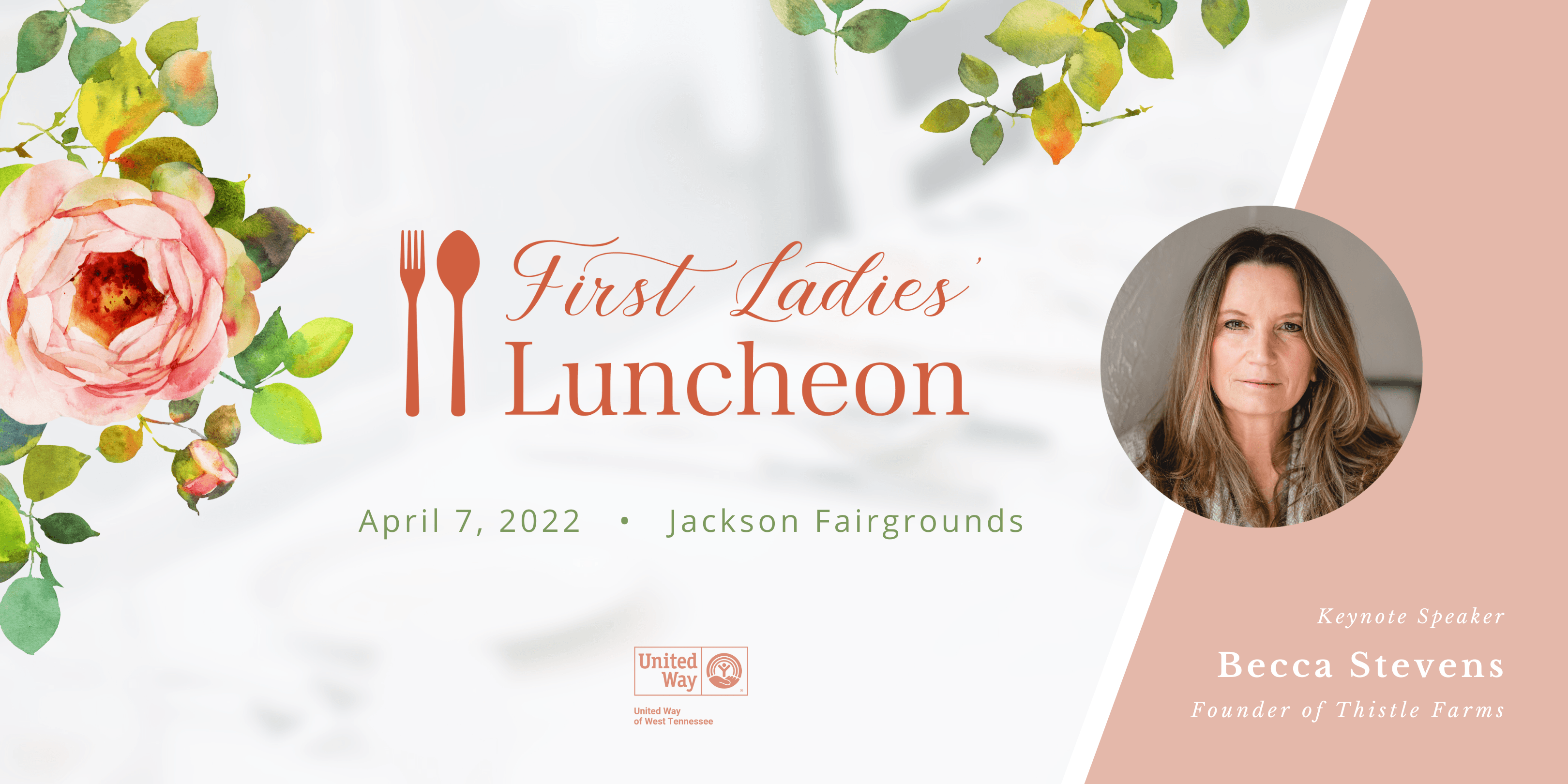 The 9th Annual First Ladies' Luncheon will take place indoors at the Jackson Fairgrounds on April 7, 2022 from 12-1pm. Table previews start at 11am. This year’s guest speaker will feature Becca Stevens, founder of Thistle Farms.

Becca Stevens is a speaker, social entrepreneur, author, priest, founder, and President of Thistle Farms. As an entrepreneurial leader, she has established 10 justice initiatives and has raised over $55M in funding. Stevens leads important conversations across the country through speaking, advocating, preaching and writing. She walks the line between pragmatism and poetry in her message that love is the strongest force for change in the world.

Stevens founded Thistle Farms in 1997 with a single home for survivors of trafficking, and addiction. Almost twenty-five years later, it is a global movement for women’s freedom. Today the Nashville flagship includes a residential program that serves as a national model for women’s recovery, and three justice social enterprises that provide jobs to survivors—amounting to $4M in earned income last year. Stevens also developed the Thistle National Network to provide tools, workshops, and conferences to support young organizations wanting to follow its holistic model of recovery, as well as Thistle Farms Global Shared Trade, which supports 1,400 artisan survivors in 22 countries.

Additional enterprises Stevens has helped establish include the Center for Contemplative Justice and Larkspur Conservation in the U.S., as well as Escuela Ann Stevens and Sibimbe in Ecuador, Moringa Madres in Mexico, and Love Welcomes in Greece.

Stevens has been profiled on PBS NewsHour, The Today Show, CNN, ABC World News and in The New York Times. Her many awards include CNN Hero, White House Champion of Change, Humanitarian of the Year by the Small Business Council of America, Tennessee Human Rights Outstanding Service Award, and induction into The Entrepreneur Center’s Hall of Fame, and Tennessee Women’s Hall of Fame. Becca attended the University of the South and Vanderbilt Divinity School, receiving alumnae distinction awards from both. Stevens has also been conferred multiple honorary doctorates.

Stevens speaks to a broad range of non-profit, religious, and business audiences—often in bare feet to show solidarity with those she serves. Drawn from 25 years of leadership in mission-driven work, the courageous stories of women survivors, and wisdom from nature and healing traditions, Stevens inspires and motivates audiences everywhere with practical and loving steps to inspire change in individuals and communities. Her next book is slated for August 2021 on Harper Horizon.